Warning: "continue" targeting switch is equivalent to "break". Did you mean to use "continue 2"? in /customers/f/6/1/kaisyngtan.com/httpd.www/r3fest/wp-content/plugins/siteorigin-panels/inc/styles-admin.php on line 392 LONDON Leg: programme, people – RUN RUN RUN Biennale
↓ Skip to Main Content 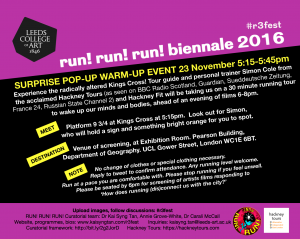 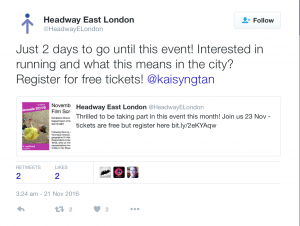 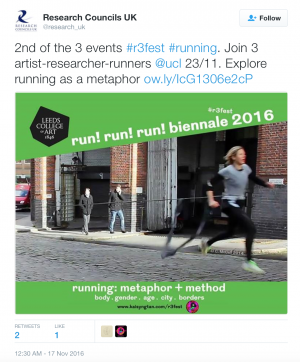 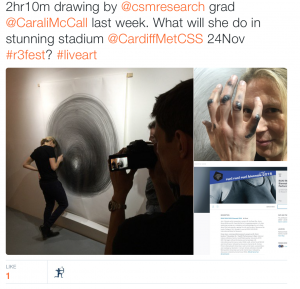 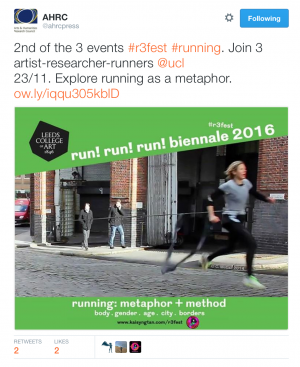 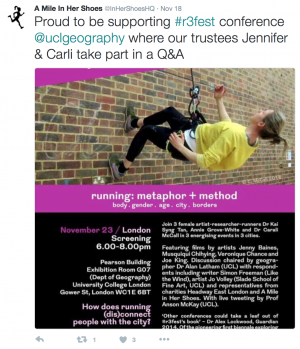 London Leg: How does running (dis)connect people with the city? 23 November Wednesday 6-8pm

VERONIQUE CHANCE  In the Absence of Running  – 3 minutes 55 seconds

After the event we will head to the nearby Jeremy Bentham Pub. Everyone is welcome to join us. 31 University St, London, WC1E 6JL

Jenny is an artist working predominantly with 16mm film. She performs repeated, often absurd actions for the camera, pushing the limitations of this mechanism and her own physical endurance. Her looped and double-screen films explore the out-of-frame as a space of potential. Her practice-led PhD research, How to do things with film examined the performativity of analogue film and how the out-of-frame can become a site of affect. Jenny studied at the Slade School of Fine Art and exhibits her work internationally. Screenings and exhibitions include Contact Festival of Experimental Film and Video, Analogue Recurring, London Short Film Festival, Urban Screens Norway, Film Doubled Forever Changes, 10th International Istanbul Biennial, Copenhagen Film Festival, S1 Salon, Whitstable Biennial.

Musquiqui is an artist based in Berlin, Germany and Taipei, Taiwan, member of the art group “Fuxinghen Studio” and music band “Mosquilephant.” He works principally with multi-material, such as installations, drawing and video. Human body and social domain, as well as how art production twist daily routine play chief role of his aesthetic focus. Musquiqui has participated in several international exhibitions, such as “2012 Taiwan Biennial”, “2014 Shanghai Biennale” and regularly publishes art articles in Art publication.

Veronique is an artist whose practice is mainly photography and video based, but also maintains strong links with sculpture and performance practices. Her interests lie in the relationship between the physical presence of the body and its presence as a screen image, through which she examines the impact of visual media technologies on our perceptions of the body as a physical presence. Veronique received a CCW Graduate School Staff Research Fund Award from the University of the Arts, London to support the development of ‘The Great Orbital Ultra Run’ project. Previously an Associate Lecturer at the University of the Arts, London, she passed her PhD in Art at Goldsmiths College, London in October 2012 and has recently been appointed as Course Leader of the MA Fine Art and MA Printmaking at Anglia Ruskin University, Cambridge.

Annie is an artist who looks at the female ageing body socially and culturally, and her video Breath / Mind / Muscle uses running as a starting point that draws out a range of complex and sometimes conflicting moments. Recently, she worked with nine other artists exploring a variety of issues around the decommissioning of the last remaining Magnox nuclear power station in the UK at Wylfa in Anglesey, north Wales. Annie has an MA in Design History & Theory (Distinction) and MA Photography (Distinction); after 12 years as Research Principal, Principal Lecturer, and Director of Student Experience, and Director of Learning & Teaching at the Cardiff School of Art & Design, for the past 5 years as visiting tutor at Arts University Bournemouth.

Joe is an artist working across the field of moving image; using innovative techniques and animation to combine and manipulate photography, film, video and sound. His work moves between single screen and multimedia gallery installations. King studied Film and Photography at the International Film School Wales and Animation at the Royal College of Art. He has been a tutor in the Animation programme since 2001. Joe King’s films and videos have received funding from Film London’s Artists’ Film and Video Awards, S4C, Sgrin, Film London Artists’ Moving Image Network, BBC Radio 4 and the Arts Council. His films have been nominated for, and won, prizes including the Jerwood Moving Image Award 2008, SXSW Film Festival (USA, 2006), Ann Arbor Film Festival (USA, 2006), Hull International Film Festival (UK, 2006), Festival du Nouveau Cinema, Montreal (Canada, 2006) and 25 fps (Croatia, 2006). Co-founder of Folk///projects, he is also a director for the production company Slinky Pictures. Other areas of his practice include editing and sound design. He lives and works in Essex and London.

Carali is a Canadian-born artist, based in London UK; awarded her Ph.D. at Central Saint Martins College of Art and Design, UAL (thesis title, A Line is a Brea(d)thless Length: introducing the physical act of running as a form of drawing) and completed her MFA at Slade School of Art, UCL. Her practice explores movement and the role of the body in drawing. It addresses how duration, expenditure of energy and imposed restrictions on the body can contribute to a greater awareness of what it means to draw. Approaching the body as a tool, I embrace the idea that the artist is not only physically present in the act of drawing, but also brings an experience to something that exceeds the object of art (be it through the body in live performance, video or sound recording, or photograph). Recent exhibitions and screenings of work include House of Illustration with Drawn Together, Kings Cross, London UK, Folkestone Fringe Triennial 2014, Performance Space, London, 2013 and ‘Again and Again and Again: Serial Formats and Repetitive Actions’ Vancouver Art Gallery, Canada, 2012.

Kai is an artist, visual director and researcher, whose work has toured 450 shows including dOCUMENTA, 8th ASEAN Para Games Ceremonies, and Biennale of Sydney, at MOMA, ZKM, ICA and Dom Muzyki et al. Upon completing her PhD at the Slade School of Fine Art, she founded the RUN! RUN! RUN! International Body for Research to explore running as a critical and creative toolkit to engage with the self, others, the city, technology and non-logocentric modes of thinking. Recognition includes the SFIFF Golden Gate Award and Japan Foundation artist-in-residency award. Her works are collected by the Museum of London, Wellcome Trust and Fukuoka Art Museum. Kai is a Research Fellow at Leeds College of Art, Fellow of the Royal Society of the Arts, AHRC Peer Review Member and 2017 International Commissions Panel member for Unlimited, a £2 million, three-year programme funded by Arts Council England and Creative Scotland. Last year she was Visual Director and Communications Director for the 2015 Opening and Closing Ceremonies of the 8th ASEAN Para Games (south east Asia’s Paralympics).

Alan is a cultural and urban geographer whose research focuses on sociality, mobility and public-ness. After gaining bachelor and master’s degrees in his native New Zealand, he moved to the UK to take up a Commonwealth Research Fellowship at the University of Bristol where he obtained his PhD. He has spent time working at the TU Berlin, and the Universities of Auckland and Southampton. He has published extensively in edited collections and academic journals and is the co-author of Key Concepts in Urban Geography and co-editor of Key Thinkers on Cities. His work has explored a range of sites in cities as diverse as Auckland, London, New York, Eugene (OR), Berlin, and Champaign-Urbana. He is currently writing a contemporary history of sedentarism and practices of aerobic fitness. He teaches at University College London.

A Mile In Her Shoes

A Mile in Her Shoes is a volunteer-led charity that encourages women who may have been affected by issues related to homelessness to experience running as a way of exercising, socialising, boosting confidence and raising self-esteem.

Headway East London is a local charity supporting people affected by brain injury. They offer specialist support and services to survivors and their family, whilst also campaigning for greater public awareness. Their vision is to build a community where people with brain injury are valued, respected and able to fulfil their potential.

Jo’s contributions as Advisor, Host, Timekeeper and Chef made RUN! RUN! RUN! International Festival of Running 2014 a success that it was. Born in Grimsby 1953, Jo studied as both graduate and undergraduate at the Slade 1972-1977 where she was awarded the Boise Travelling Scholarship to Italy. In 1986 Jo was appointed lecturer at the Slade and from 1989-2002 directed the Slade Summer School and the Affiliate Programme. Jo is currently Senior Lecturer on the graduate painting programme, Co-Director of The Material Research Project and Director of the Material Museum.

Resident Tweeter at the 2014 RUN! RUN! RUN! festival, Anson reprises his role for the 2016 run. Anson works in the Environmental Change Research Centre, in the Department of Geography at UCL. He is currently Vice Dean for Research in the Faculty of Social and Historical Sciences (2013-2016).  Anson originally studied at the University of Edinburgh (BSc Biological Sciences: Botany; 1989) and then undertook a PhD in Palaeoecology at the University of Manchester (1993). He went to UCL in 1992 on Leverhulme funded fellowship, assessing the impact of pollution on Lake Baikal. Anson has worked on this unique lake ever since, as well as other iconic sites, including the Aral Sea and the Okavango Delta in Botswana.

Like the Wind magazine is a collection of running stories. There are personal anecdotes, inspirational tales, reportage, beautiful illustrations and stunning photography. The magazine launched in February 2014 and is published every quarter. Simon Freeman is a founder and editor.