#r3fest: An International Festival OF Running 1.0

* ‘Show & Touch’ by paleoanthropologist Dr Matthew Skinner and Ms Gemma Price: of a fossil cast of a 2-million year old early human runner which can serve to remind us, amidst the ‘Nike-fication’/ commodification of running today, of how it all began.

* 8-minute ‘Talk Fests’ by expert sports medic Dr Courtney Kipps (London Marathon, Team GB 2012 Olympics & Paralympics et al), artist Ms Jo Volley (who likes to pick up oak apples when she runs and then magically transforms them into ink that she uses in her paintings) and Streetscape (an award-winning landscaping social enterprise for young people that has arisen from founder Guy Watts’ passion for long distance running).

* ‘Running London Tours’ by Dr Kris Grint/Bentham Project (through the thrilling West End on the ‘pre-prandial circumgyrations’ of philosopher Jeremy Bentham back in the 1820’s) and Mr Richard Wright (community involvement specialist on social transformation in Bloomsbury).

* Hands-on or rather ‘Feet-On Workshops’ run by Collectif Totem, a group of researchers in the fields of Geography, Sociology, Planning and Architecture who have come all  the way from Grenoble, Milan and Oum El Bouaghi, and Dr Andrew Filmer, who hails from Aberystwyth (and Sydney).

* ‘Live’ performance of Run To Draw by Amelia Johnstone and Peter Hathaway,which demonstrates how running can allow us to re-claim fun and be creative.

* A ‘Museum Of Running’ by the Walking or rather Running Encyclopaedia of Running and Curator of Run Run Run! itself, Dr Alan Latham, which showcases vintage Nike running shoes and classic Runners’ World magazines from the 1970′s.

RUNNING THROUGH THE EXISTING CONTEXTS

Since at least the 1970’s, the world has experienced what British runner Sir Roger Bannister calls a ‘running boom’ (cited in Newsholme & Leech 1983, p.vi).The London Marathon welcomes nearly 40,000 runners annually (The London Marathon Limited 2013). Worldwide, a marathon held daily, and Palestine held its first – named Right To Movement – last year. Lest you thought that this was a passing fad, think again, for we have run for 2 million years. Our ancestors ran for up to 6 hours across 20 miles to hunt for food (Liebenberg 2008). After all, human beings are ‘born to run’ long distances (Bramble & Lieberman 2004), endowed as we are with unique physical attributes ‘tailor-made for running’ (Bramble & Lieberman, cited in Chen 2006) – as well as an indefatigable ‘ability to dream far ahead’ (Heinrich 2002 p.177). In other words, running may have the potential to be worked through not just as a physical process but a poetic one, and not only as a subject matter but methodology and practice, not just as an activity/verb but a concept/noun. Running may even give the cultural tradition of walking a run for its money, given how it may be conducive to creativity. Did you know, for instance, Alan Turing was said to have invented the computer in the middle of a run (Burfoot 2007)? In fact, novelist Joyce Carol Oates finds running so stimulating that she even recommends it as an antidote to the writer’s block (1999). After all, given our technology-saturated reality, what better counterpoint than running? While we obsess about the ‘digital’ – of the ones and zeroes of the computer – in this day and age, we cannot forget that we use our bodily ‘digits’ – not just that of the fingers that zap the screens, but that of our tenacious toes that keep our feet on the ground. And who can forget feisty ‘Lola’, who ran and transformed her fate in the film Run Lola Run (Tykwer 1998), or Colin of The Loneliness of the Long Distance Runner, for whom running is a political act? Still unconvinced? Run through the Oxford English Dictionary, and you will find no fewer than 81 definitions and conjugations for the word ‘run’ – which run across 14 pages (Simpson & Weiner 1989, vols.XVI, p. 250–264). In fact, the Latin etymology of ‘discourse’ refers to ‘running from one place to another’ (Blackburn 2008 p.102). No wonder in the past decade, philosophers, novelists, geographers and neuroscientists have been harnessing running in their research (Austin 2007; Murakami 2008; Latham 2013; Mattson 2012). Even artists and groups like Jun Nguyen-Hatsushiba and Critical Run are jumping up and down about running.

NOT YOUR RUN-OF-THE-MILL CONFERENCE

The time is ripe for us to get together to exchange notes, debate, probe, critique and celebrate everything about running. Run Run Run! An International Festival of Running 1.0 is a cross-disciplinary event about running, by runners, for runners – and the sceptics, as well as everyone else from all walks of life (including those who prefer to sit on the fence). This will be the first time such an eclectic group of people flock (and run) together to explore the territories – thus far, to come – of running as a subject matter, methodology and practice, in the forms of 8-minute ‘Talk Fests’, ‘live’ performances, artworks, films, ‘Running London Tours’ and readings. Indeed, we were heartened by the response we received. Researchers and practitioners from throughout the UK and beyond (Milan, Melbourne, Grenoble, Glasgow, Vancouver, Venezuela, Lethbridge, Lancashire, Ljubljana, Singapore, Essex, Newport, Oxford, et al) from a wide range of fields (biomechanics, fine art, performance, social housing, psychiatry, bio- and cultural anthropology, kinesiology, geography, theatre, history, medicine, museum studies et al) have stepped forward to be involved in this first-of-its-kind event. This may confirm our observation that the study of running is picking up steam, and academics are increasingly taking running seriously. Running parallel to how running as an exercise or sport has a critical mass of practitioners, there seems to be a growing ‘critical mass’ of researchers who study running, and are hungry to meet other like-minded colleagues as well as to take things a step further. This can serve to demonstrate that running has the potential to function as a meaningful way to cut laterally across departments and disciplines, making it something that truly transcends disciplinary and institutional boundaries. This may also prove how running can have mileage and can generate impact within and beyond the academic world.

A RUNDOWN OF THE PROGRAMME

After an ultra-marathon of 6+3 hours running through the submissions, we have nearly finalised the programme, which features exciting mix of bigwigs and newbies working through running in a dazzling array of ways. We are excited to say that a few of these will be premieres, or works-in-progress (so remember that Run Run Run! An International Festival of Running 1.0 was where you first experienced them, and where you provided invaluable feedback to these researchers!). In this gig, we are showcasing nearly 40 works. A whopping number by most measures, but perhaps only the tip of the iceberg in terms of what running may offer as a rich territory of study. From this programme, we may identify a few genres or pathways, which may include:

It goes without saying that these classifications are by no means distinct but arbitrary, broad, overlapping and fluid. If you are presenting, you may well be cursing and spitting at the screen/the person who has written this, and protest against how your work has been grouped. Indeed, there are possibly as many ways to think about (talking about) running as there are shoe designs and running gaits – and that is one of the motivations behind setting up this event. Run Run Run! An International Festival of Running 1.0 aims to function as a platform to get us to think about the different ways we can think and talk about running, and beyond. It is not about claiming that running is the answer to everything, but to propose that running as a concept and act could act as a lens or filter through which we may gain an insight into things. Through the Festival, questions that may be drawn out can include: What is running? What can running do? What could it be? What is it not? Through running, what are the ways in which we can articulate other ideas, including critical issues such as the health crisis, creativity, our relationship with the city, and so on? What are the emerging trends in this area of research? What are the evolving contexts? What are the current challenges and opportunities? What might the scope and extent be? Where are the zones of contact and conflict? As possible pioneers of an emerging field, what are the next steps we could/should take? What are our individual and collective aims? Is running the lowest common denominator that brings us together, and if so how can we harness it as an opportunity/starting point/jumping board to work on other discourses? Or is running possibly something more profound or metaphysical, more grand, or more primitive, or is it a mechanism/medium/toolkit/app that can lift us to these modes? (How) Can we work towards outlining a manifesto, map or wayfinder for our colleagues, students, readers and audiences?  How can we share resources? How could we compete with or pace one another? How can we join forces and forge new pathways? At the end of the first Festival, what do we leave with (what’s in our – metaphorical – goody bag)? Should we run a Festival 2.0? What’s our action plan?

Over- over- overdose yourself with all all all about running. Run into other fit and clever folks and make history. Mobilise this occasion as a springboard to question what running can be, to think further/deeper/broader about possibilities of running, and to kickstart collaborations. Run Run Run! An International Festival of Running 1.0 #r3fest is a first initiative. There are plans for further activities – more more more, soon soon soon. Don’t just sit there and watch. Come join us towards the creation of (something of) a new movement. 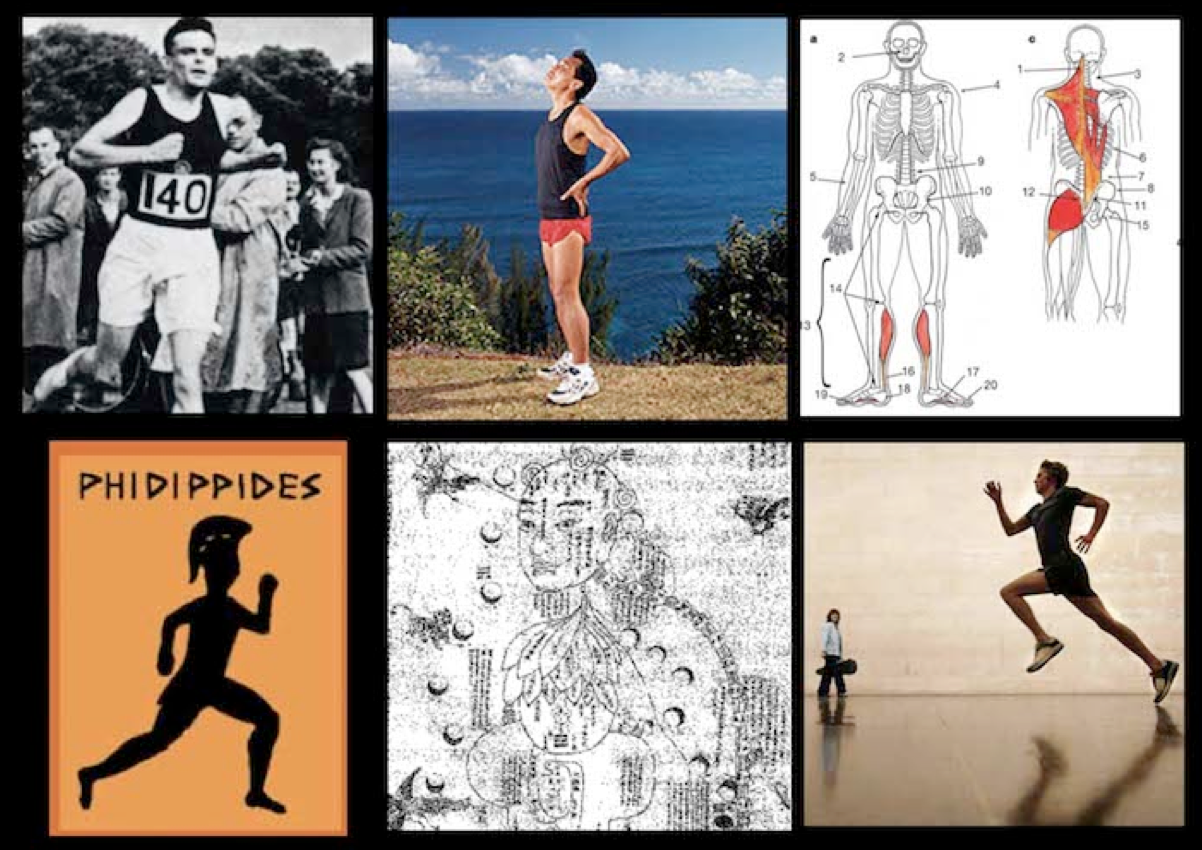 Following in the footsteps of our FORERUNNERS (l-r clockwise): distance-running-expert-cum-code-breaker Alan Turing; runner-cult-novelist Haruki Murakami; our running ancestor, the Homo erectus, with a body ‘tailor made for running’ (Bramble and Lieberman 2004); Martin Creed’s No. 850; the Daoist body as world (and world as body); the legendary messenger Phidippides. All images from the internet.

Austin, M. ed., 2007. Running and Philosophy: A Marathon for the Mind, Wiley-Blackwell.

McDougall, Christopher. 2009. Born to Run: The Hidden Tribe, the Ultra-Runners, and the Greatest Race the World Has Never Seen. Profile Books.