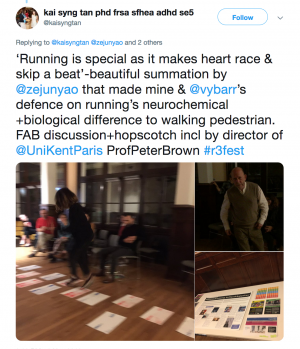 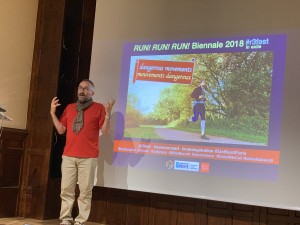 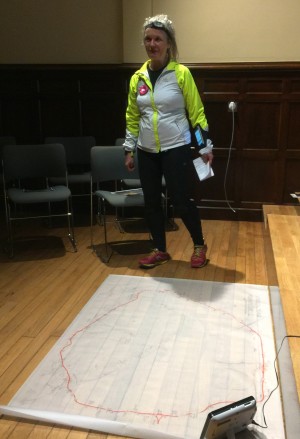 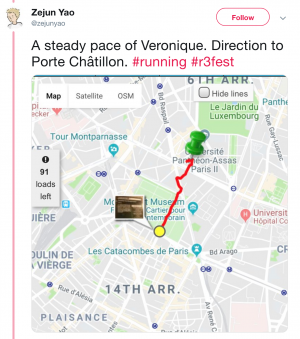 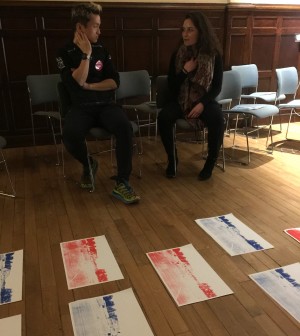 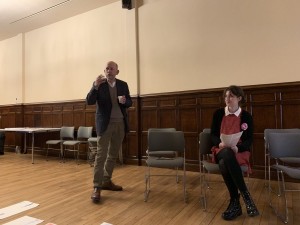 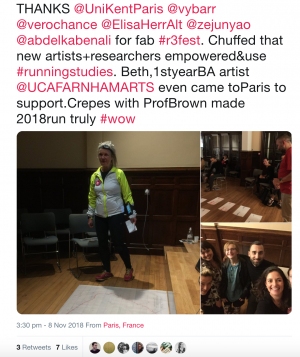 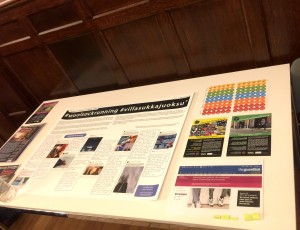 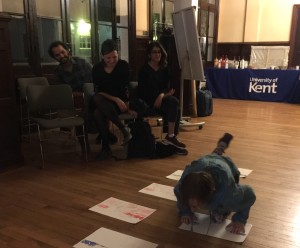 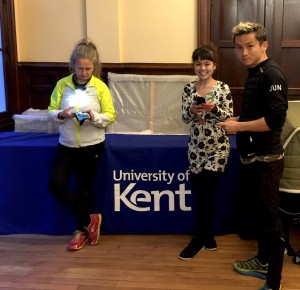 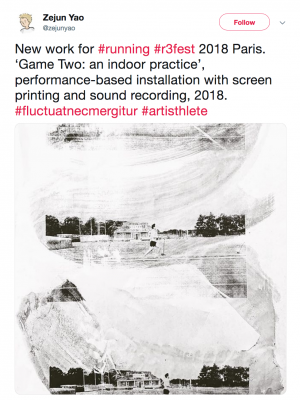 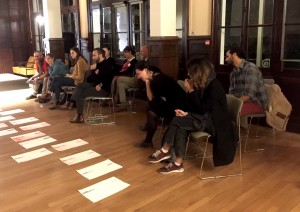 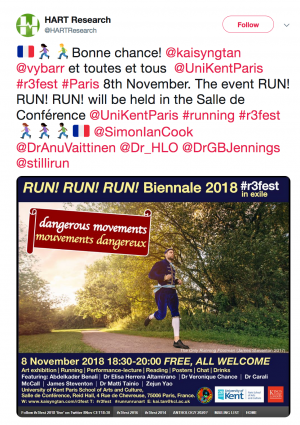 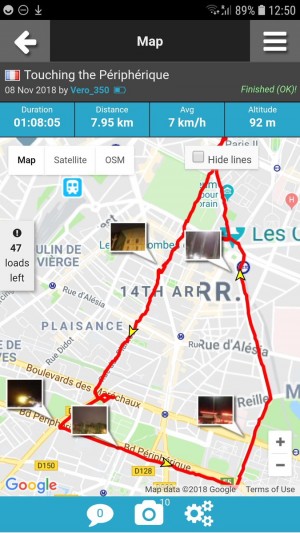 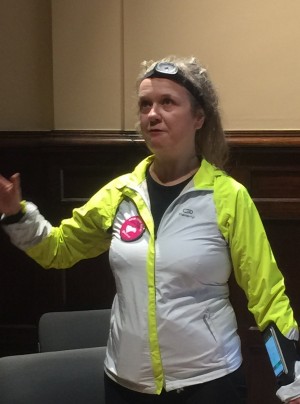 Dr Veronique Chance all kitted out for Touching the Périphérique. #r3fest 2018: photo by Kai Syng Tan 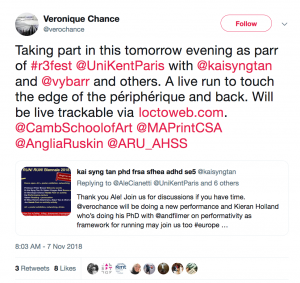 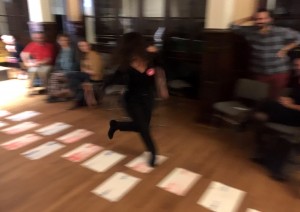 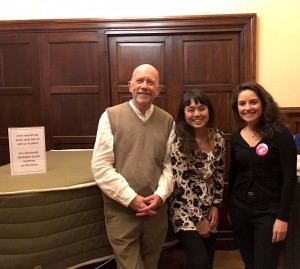 Professor Peter Brown (Director of the Paris School of Arts and Culture) , Kai and Elisa. By Dr Elisa Herrera Altamirano 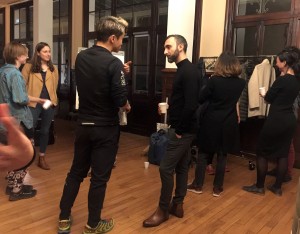 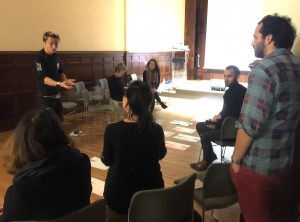 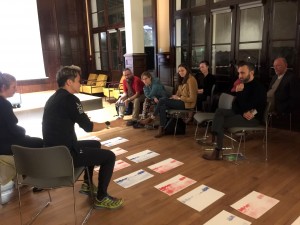 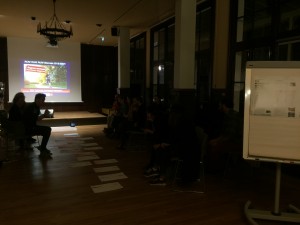 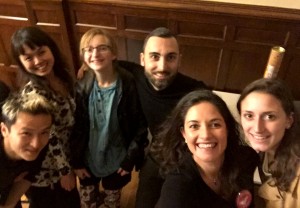 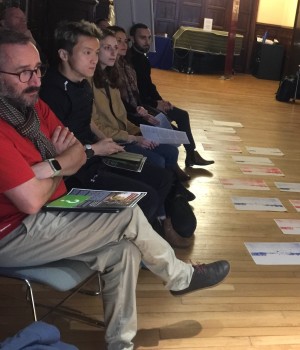 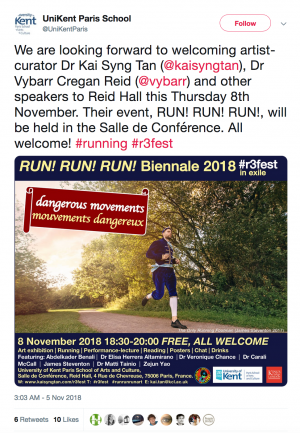 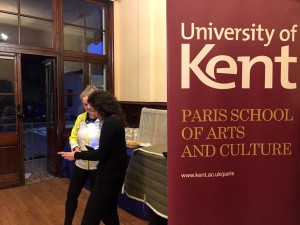 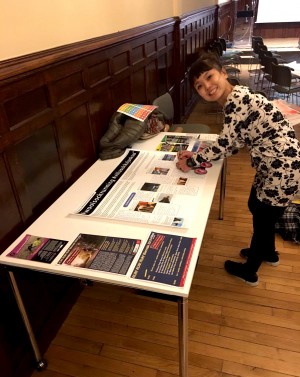 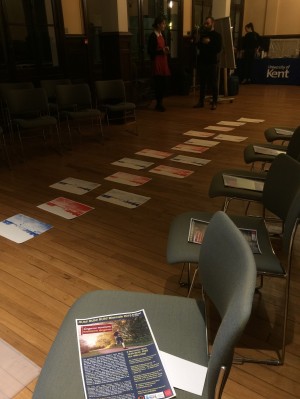 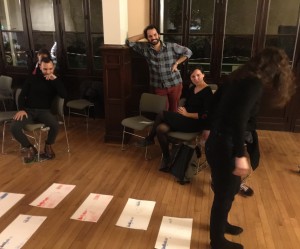 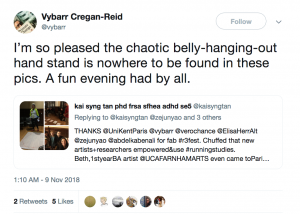 The RUN! RUN! RUN! Biennale #r3fest 2018 was successfully held on 8 November 2018. It was an intimate but lively affair, including with a hopscotch dare by featured artist Zejun Yao, evidence of which can be seen in the images and clips above. Featured artist Dr Veronique Chance also successfully carried out a pilot of her performance, during which she ran approximately 8km to and back from the Périphérique in a new work Touching the Périphérique. Questions came thick and fast regarding the specificity of runing – why running? How is it different to other movements and mobilities? To which featured researcher Dr Elisa Herrera Altamirano spoke passionately about running as a political and positive force for good. Dr Vybarr Cregan-Reid gave a run-down of how the contemporary human being is ill-fitted to their environment which was very uplifting — not. We were also introduced to the dangerous movements of #woolsockrunning by Dr Matti Tainio and climbing up a building by Dr Carali McCall, saw a virtual face-off between author-runner Abdelkader Benali versus Jean Baudrillard and last but not least saw some hope in the figure of the boundary-crossing running-messenger epitomised by James Steventon. We were so busy with the discussion in situ that we hadn’t the chance to continue tweeting but are grateful to Dr Andrew Filmer and Dr David Hindley for their support. It was encouraging to hear the term ‘running studies’ being activated throughout the evening, and very heartening to witness how new researchers and artists are taking it on and running with it. Thank you, all, for your wonderful support of the third RUN! RUN! RUN! Biennale #r3fest. We will be writing up some of this in the near future, so please watch this space. The interdisciplinary conversations and small steps towards running studies continue. We are thankful for the generosity and immense kindness of Professor Peter Brown, Director of the Paris School of Arts and Culture which hosted the Biennale, Emily Rae and the evening’s outstanding assistant Sinéad Mccausland, an MA student in film.  Till the next run!

‘Thank you for an amazing event! It was such an inspiring experience to meet so many great artists and researchers, some of whom I’ve been following for some time – and great to discover new people and their work too. I found it really educational and it was well worth the journey to Paris. Meeting like-minded people was really valuable. So many different themes/aspects of running covered in the talk as well – I’ve been approaching running in my own practice with the idea of “pilgrimage” in mind, also considering Long and Fulton’s work – so this gave me a lot of new ideas, especially around the politics of running, the history of running (evolution) and the potential of the runner in society today. I’ve now got a nice long juicy reading list. The resources and the conference are bound to fuel my own practice. So inspiring! Great to talk to you although it was brief.’ — artist Beth Clayton, first year student, University for Creative Arts Farnham

‘The event was pretty beautiful, thanks so much for curating it, for the invitation, for all the work in the organization and all the love you put on it… it´s evident from the outside that you work so hard and I really thank you for that. It is inspiring and enjoyable to work with people who love what they do.
I really want to keep on the interdisciplinary conversation about running studies so count on me definitely for further work-research-grants-events-provocations and so on’. — featured researcher Dr Elisa Herrera Altamirano

‘It’s really interesting and encouraging to hear the term “running studies” […] But also how running is being activated and seeing how new researchers and artists are taking it on and running with it. Really wonderful to see how your persistence and commitment is powering through’ — featured artist Dr Carali McCall

Set against our precarious situation today (Brexit, closed borders, the anthropocene et al), and with special attention paid to the Parisien mise–en-scène, the RUN! RUN! RUN! Biennale #r3fest 2018 explores Dangerous Movements. What do mobilities and the (end to the?) freedom of movement mean today? What insights can art movements like Situationism and the historical boundary-crossing foot messenger reveal? In what ways could ‘Running Studies’ contribute towards creative steps to re-make the world around us?  Are we as artists, researchers and runners playing too safe? #r3fest 2018 was co-curated by artist Dr Kai Syng Tan (NCCPE 2018 Images Award, ASEAN Para Games Ceremonies 2015) based in King’s College London, with author Dr Vybarr Cregan-Reid (Primate Change 2018, Footnotes 2016), who is a Reader in English & Environmental Humanities in the School of English at the University of Kent. This year’s programme consisted of readings, performance-lectures, poster display, art exhibition and two new performances. #r3fest 2018 features 7 artists, writers and researchers, including friends new to #r3fest Dr Elisa Hererra Altamirano and Zejun Yao, as well as friends who’d been with us since 2014 when RUN! RUN! RUN! first began, like Dr Carali McCall, James Steventon, Dr Matti Tainio. Elisa, Jun and Veronique will be joining us in Paris, with Jun and Veronique sharing new work. Also showcased was Holland’s top writer Abdelkader Benali, whose interview with Kai in 2012 was shared in her new performance-lecture. Vybarr read from his newly-published Primate Change (2018), which follows hot on the heels of his bestselling Footnotes (2016). Dr Andrew Filmer (Senior lecturer in Theatre at Aberystwyth University) and Dr David Hindley (Senior Lecturer in Sport Education at Nottingham Trent University) joined in the evening by tweeting.

The University of Kent’s Paris School of Arts and Culture is a specialist postgraduate centre in one of the most culturally rich cities in the world. It offers advanced, flexible degrees across the arts, including in architecture, history of art, film, drama and literature, with modules that capitalise on the city’s vast heritage and culture. Reid Hall is located in Montparnasse. A stone’s throw away from the Latin Quarter, the University of Kent finds itself at the heart of the lively left-bank of Paris. Since the 1890s, Reid Hall has been a space for intellectuals and creatives, with an intermission during the First World War where the building was used as a hospital for French and American officers, the building has since returned to its academic roots and today houses universities from America and the United Kingdom. The Grande Salle has hosted such influential speakers such as Gertrude Stein and Simone de Beauvoir in the past.

The RUN! RUN! RUN! Biennale #r3fest is a bi-annual interdisciplinary programme exploring running as an arts and humanities discourse. Founded in 2014 by Kai and UCL geographer Professor Alan Latham in 2014, it is characterised by ‘productive antagonisms’ (Latham and Tan 2017) in its activation of running as a methodology and metaphor to disrupt + make new connections across disciplinary and other borders (Tan 2018) , as well as its ‘positive atmosphere’ (Guardian 2014). If the first (attended by 50 artists and researchers from 30 institutions at the Slade Research Centre), then emphatically named the RUN! RUN! RUN! International Festival of Running, was a celebratory survey and test of concept, the second, held in 2016 and co-curated with artists Dr Carali McCall and Annie Grove-White in London, Cardiff and Leeds including in an indoor stadium, was its second, darker album, a sobering insight into borders, gender, ageing, power and the body, set against the backdrop of the sudden, shocking turn of events over Summer 2016.

A key feature of RUN! RUN! RUN! is how it engineers unexpected spaces of creative collisions and ‘productive antagonisms’ (Latham and Tan 2016) between and across disciplines, formats, hierarchies and differences.  For the 2014 run for instance we had lectures (such as by keynote speaker, Chair of cultural geography from the University of Glasgow Professor Hayden Lorimer) ‘intercut’ with 8-minute speaking slots (which we timed with a stopwatch), object-based learning activities (UCL’s paleoanthropology researchers brought samples illustrating anatomical parts for participants to handle) alongside academic posters (such as by a Loughborough University biomechanics PhD researcher) and new artworks (such as by Jo Volley, award-winning painter and Slade School Senior Lecturer); senior academics (including the then UCL Vice-Dean for Research in the Faculty of Social and Historical Sciences Professor Anson Mackay in charge of live tweeting) intermingling with emerging artists (including a 22-year-old theatre undergraduate) and science was set up against spirituality: a meditation session conducted by a representative from the Sri Chimnoy Centre was programmed at the same time with a lecture on injury prevention by UCH clinician Dr Courtney Kipps, who is also the Medical Director of the London Triathlon and London Marathon. RUN! RUN! RUN! asks:

Collaborators over the years have included artists, academics, friends from the third sector, runners and non-runners including:

Click on the following to find out more about RUN! RUN! RUN!