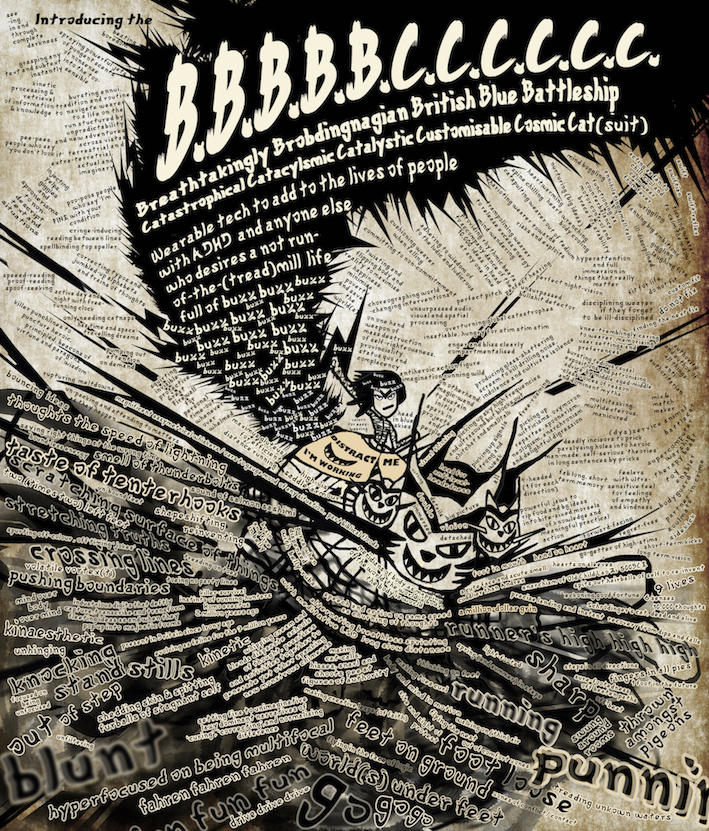 Stephen Hawking has his chair, Don Quixote his ass, Lao Zi his bull, and Oscar his tin drum. Finally, a service animal to assist and enrich the lives of people with (and without) ADHD, dyslexia and dyspraxia. Better still, embody the beast — put it on (velcro-fitted, so no fiddly complications!). The BBBBBCCCCCC, is a 21st century wondrousness of wearable technology by way of Alice in Wonderland’s grinning Cheshire Cat, with nods to ancient Chinese Daoist medical diagrams that map the human body as an active agent of the cosmos, the Brobdingnagian stim-galore universe of Jonathan Swift’s Guilliver’s Travels, Giacomo Balla’s dynamic Futuristic figures in action, and your step-nephew’s £13.99 superhero costume from Asda’s. Get one now.

The largest picture show here is a digital drawing by Kai. Completed in May 2016, it is entitled Introducing the BBBBBCCCCCC aka the BREATHTAKINGLY BROBDINGNAGIAN BRITISH BLUE BATTLESHIP CATASTROPHICAL CATACLYSMIC CATALYSTIC CUSTOMISABLE COSMIC CAT(SUIT). It has been collected by the Wellcome Trust and will soon be searchable by the Wellcome Library website. An earlier draft (without the running legs) was printed on canvas and exhibited on March 2 at the Whitworth Art Gallery in Manchester, at the first Museums for Health and Wellbeing Conference, which was organised by UCL’s National Alliance for Museums, Health & Wellbeing.

One of the aims of this diagram/map is to create a playful and critical counter-narrative to existing literature and images. In the artist’s own bid to understand her recently diagnosed ‘conditions’ of ADHD, dyslexia and dyspraxia, she has found them to be disappointingly and overwhelmingly negative (particularly those from the medical sector), which tend to focus on how the difference, disabilities, ‘disorders’ or ‘abnormalities’ could be ‘cured’, ‘corrected’ and even ‘normalised’. The catsuit is also targeted at ‘neurotypical’ people, whose lives, as argued by the artist, could be enriched if they can also enjoy some of the traits of ADHD. The image can itself be interpreted as a snapshot of how a non-neurotypical mind may function (ferocious speed of being on the go; penchant for wordplay as a subjective way of making language understandable to self; ‘pattern-seeking’ and engaging in visual thinking).

Yet earlier drafts were created in January 2016 (drawn on whiteboard) and December 2015 (drawn on Keynote). The latter was created partly in response to the floods that happened over Boxing Day 2015 (see gallery below for its legacy). With this monstrosity of a battle ship, no flood (or flood of words) can drown the wearer/sitter.

* Acknowledgement: Graham Curling of Leeds College of Art for providing the inspiration for the (Dys)Service Cat(suit) in December 2015.