A participatory exercise celebrating cooperation, conversation, conviviality and the right to movement, Hand-In-Hand was first commissioned for the Fete de Tuiles or Festival of Tiles, a street festival attended by 100,000 in Grenoble, France, 4 June 2016. It was re-run at the Whitworth Art Gallery as part of Culture Shots on 22 July 2016, with a group of trainee nurses and a researcher from the nearby hospital and university as part of their training module on wellbeing. I also wrote an essay entitled ‘Hand in Hand: Activating the body in motion to re-connect with ourselves and with others amidst a world in motion and commotion’, for a French-Italian publication Temps, Art et Cartographie: Representer les populations et les territoires en movement. This work was adapted as a workshop for GPs who are also lecturers at King’s College London. This was the KUMEC 2018 or King’s Undergraduate Medical Education in the Community Teacher Development conference, where I was an invited artist. There we used the work to think about communication between GPs and patients, as well as ‘wellbeing’ beyond physical health and, more generally, our place in the topsy-turvy world and our roles in it. A film drawing (2016) on this work also exists:

Run run run. Hand in hand. Run into and run with one another. from kaisyngtan on Vimeo. 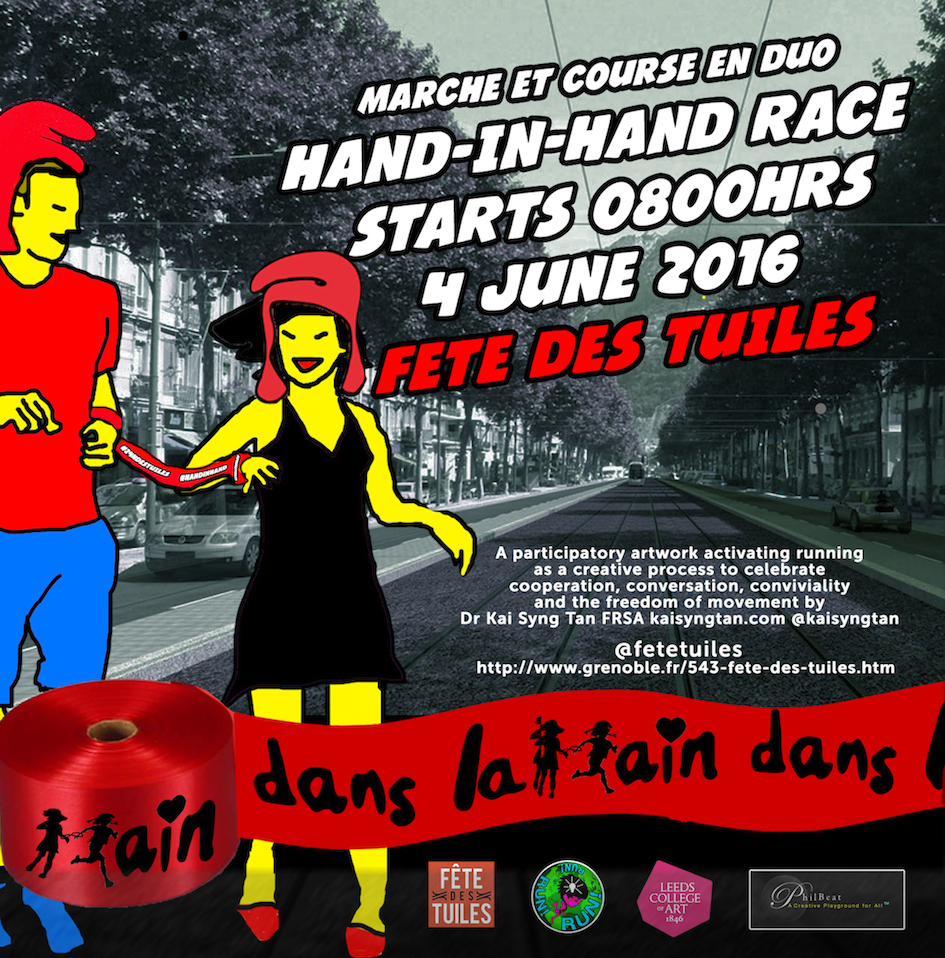 Inspired by her recent work with as Visual Director of the Opening and Closing Ceremonies of the 8th ASEAN Para Games (and learning about how blind people can enjoy running), and drawing on her 6 years of research on running as a creative and critical toolkit and 20-year portfolio as an artist, curator, advisor and academic (Documenta, Biennale of Sydney, Museum of London permanent collection), Kai has created this new participatory performance activating running as a creative process to celebrate cooperation, conversation, conviviality (as opposed, for instance, to the branding/handcuffs used to ‘other’ people as reported in the Guardian as shown below) and the freedom of movement, in response to the theme of ‘En marche, la marche, ça marche’ at the 2016 Fete Des Tuiles, at the invitation of Florent Cholat, organising committee member, PhD student at the Institute of Alpine Geography of Universite Grenoble Alpes and Universita degli Studi di Milano Bicocca, and participant of the #r3fest RUN! RUN! RUN! International Festival of Running 1.0.

The artistic intervention is aimed at people from all walks of life of any fitness level, age group or ability, including people who are walking or running the Festival course, or simply passersby. It can be applied at any part of the course, and it is up to participants if they want to cover 1metre, 10 km or 100km. The responsiveness and versatility of the project reflects a few of the strengths of running which have contributed to it popularity as an exercise throughout the world today (including how it has a relatively low entry point — nearly anyone can run; we all ran as kids and how running can be done anytime, anywhere). With bright red celebratory ribbons as tethers, the work is a simple yet defiant celebration and demonstration of autonomy and communal pleasure, reconnection with self and others, in the age of austerity, terror, intolerance (for instance of immigrants) and cynicism (for example, of politicians and banks). And what better occasion than a Festival celebrating French Independence, and held at the cosmopolitan Grenoble. When tethered to another, everything changes: how you move, how you speak, what you speak about, how you see the city. With Kai herself tethered with a local artist/resident throughout the performance, the project also presents a wonderful platform for her to learn more about Grenoble and her people. As we recall how the audacious forerunners fought for freedom and dreamt big, let us share our dreams with a new friend.

[/ppmtoggle] [ppmtoggle title=”LINKS AND ACKNOWLEDGEMENT”] The project is commissioned by Fete de Tuiles, at the invitation of at the invitation of Florent Cholat (organising committee member, PhD student at the Institute of Alpine Geography of Universite Grenoble Alpes and Universita degli Studi di Milano Bicocca, and participant of the #r3fest RUN! RUN! RUN! International Festival of Running 1.0) and made possible with the support of Leeds College of Art.