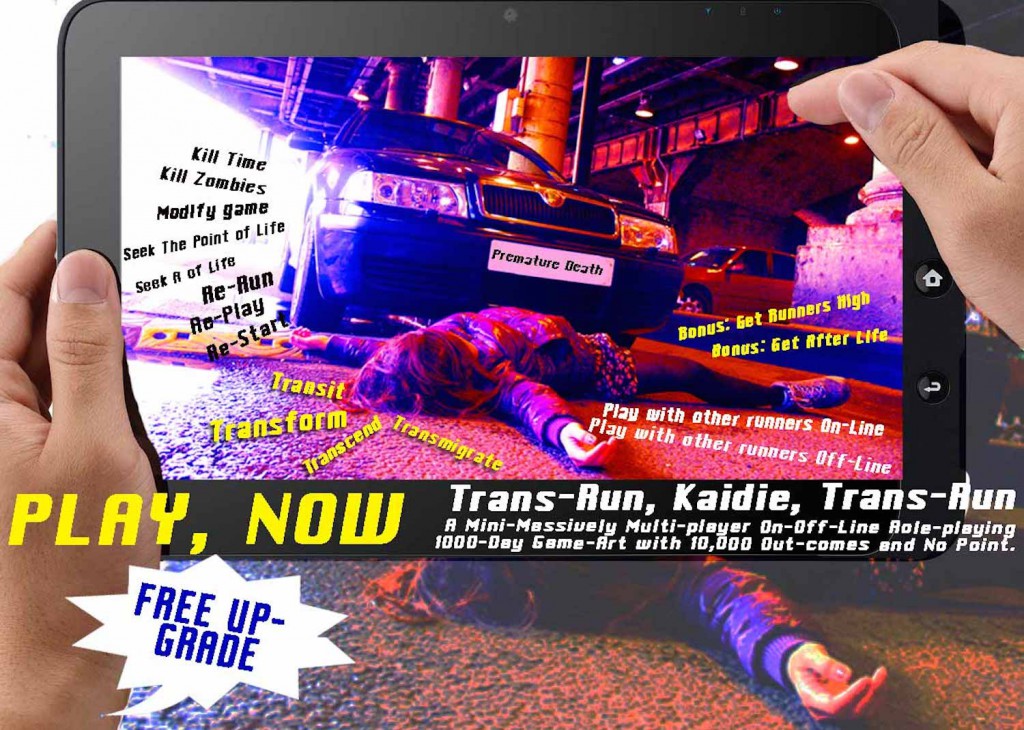 Here’s an idea for a game that you might want to consider buying.

In this app which you access via your smart mobile device free-of-charge, you play ‘Kaidie’, a ‘trans-runner’, who is on a ‘Quixotic Quest for A/The Point of Life’. You are given a time-frame of ‘1000 Days’, and you proceed via running, both physically ‘Off-Line’ or in ‘Meatspace’, as well as metaphorically, ‘On-Line’. In other words, this is a blended-reality game.

Along the way, you have to run into as many new experiences as possible, including ‘Hits and Misses’. You must also meet new runners both online and offline, who are in effect other players of the game. You can join forces and become their ‘Co-Runner’, ‘Coach’ or ‘Pacer’, or you can thwart their efforts by ‘Running Them Down’ or ‘Running Against Them’. In other words you have to be an ‘Active Agent’ ir an ‘Action Figure’. ‘Bystanders’ or ‘Spectators’ are not allowed. When the going gets tough, you can press the ‘Kill Zombies’, ‘Kill Time’ functions, or re-load ‘Sisu’, ‘Long Range Vision’, ‘Daoist Sage’s Special Home-Brew Wine’ or the ‘Tarahumara’s Special Home-Brew Beer’ . However, there is no ‘Home’ to return to, and you are required to be ‘On The Run’. After having completed more than 700 days of running, you may get lucky and be rewarded a bonus function, called ‘Runner’s High’. If you are unlucky, you may meet with ‘Premature Death’. You may get ‘Run Over by a Car’.

For users of the Premium version of the game, you are able to ‘mod’, or modify, the game, and add your own variations to the game’s basic narrative. After all, the game is already convoluted and ambiguous enough to start with. We can even collate all the variations of the  game into a the wiki – which can itself be a game.

There is one last thing to point out. For all versions, there is not one, but ‘10,000 Out-Comes’. And, whichever way you go, the primary essence – or catch – of the game, is that there are No Points awarded, nor any prizes or rewards. We wouldn’t bet on you finding ‘A/The Point of Life’ either. So, your game is truly point-less. There’s no end to your game, except your death on 09.09.2012. Perhaps, then, the point of your life is to reach your ‘End-Point’, or ‘End-Game’, of death.

All that said, death, and life, are an elastic concepts. This is, after all, a game. Your game. So, instead of dying, you may face ‘Transition’, ‘Transmigration’ or even ‘Transcendence’ (whatever that might be).

Do give us a call.