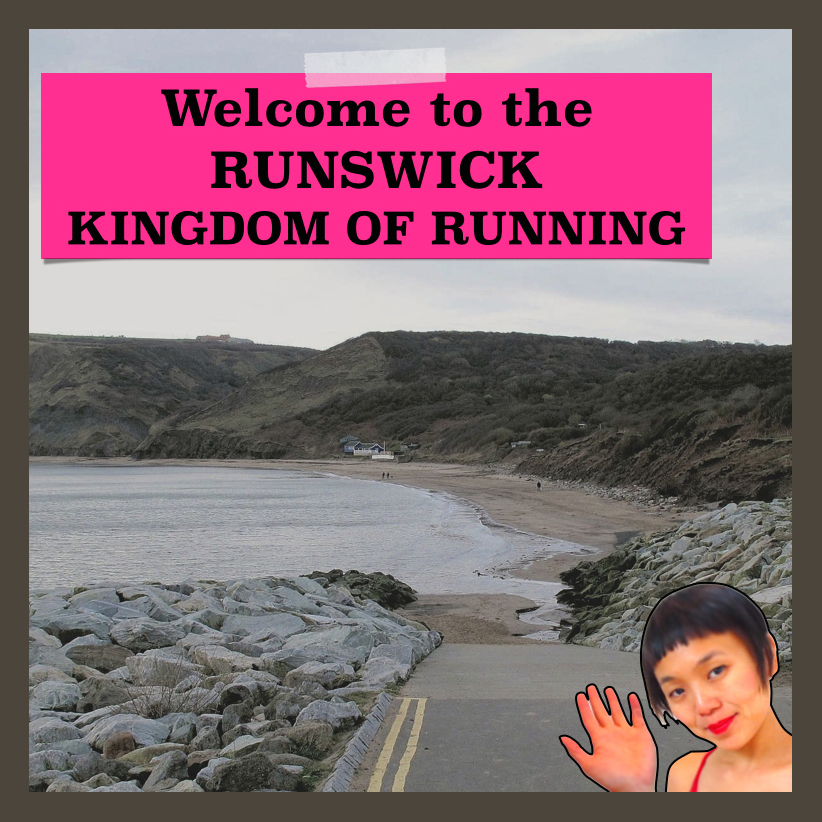 CALLING FOR SPONSORS, TV COMMISSIONERS AND NEW MIGRANTS  TO MAKE THE RUNSWICK KINGDOM OF RUNNING A REALITY – VISAS ARE RUNNING OUT SOON, SO, HURRY. The RUN! RUN! RUN! International Body for Research is colonising Runswick Bay and turning it into a Kingdom of Running. Read the proposal, entitled Run Riot in Runswick! A 5-Episode Sur-Reality-TV, below. Other variations, including a not-as-nutty, straight documentary, or a poetic essay film, or a less-ambitious plan to only run a Running School at Runswick, are also available. This proposal was conceptualised in 2010 and was shortlisted in the 2014 Artangel 100.

[ppmaccordion][ppmtoggle title=”A RUNDOWN”]Let Your Imagination Run Riot in Runswick! A 5-Episode Sur-Reality-TV Show is presented by King Kai, a wise-wacky lady who runs this mysterious-mythical Yorkshire village. Running rules Runswick. We follow inhabitants marathon-inventor Pheidippides and cult-novelist Haruki Murakami as they run about in the daily business. However, bloodshed ensues when the King attempts to convert a new immigrant, anti-running-monger-ranter Slavoj Zizek, into a lycra-donning don. And, in a showdown with flyer-dreamer Icarus, hashish-laden-walker Charles Baudelaire and hole-jumper Alice, can the runner triumph?[/ppmtoggle]

[ppmtoggle title=”CREDITS”]‘Runswick’: Played by Runswick Bay, a remote, ‘tiny one-pub-cum-village-cum-beach’ 5 miles north of Whitby (Rough Guide 2011). Such a site is crying for art. And a new ruler.

→ ‘King Kai’: Played by Kai Syng Tan, an award-winning artist-curator-researcher-advisor-lecturer (Documenta, Sydney Biennale, ZKM, MOMA, San Francisco International Film Festival, Yamagata International Documentary Film Festival, British Short Film Festival). Kai uproots from London to become Runner-In-Residency in Runswick Bay for 5 weeks. Fully-immersed and functioning as director, presenter, researcher and writer, Kai works with a production house that employs local crew, artists, actors and the community to produce a 10-minute TV episode each week (or a single 45-minute film to be shown in cinemas). This series is based on Kai’s 4-years of Rather Serious Doctorate Research conducted at the Slade School of Fine Art as a UCL scholar which re-imagines the popular sport of running as a creative mode of expression. For Artangel, Kai creates a TV series that explores running through its histories, stories, forerunners, movers and shakers, and spotlights its playfulness, potential for philosophical meditation and political subversion, boundless poetic possibilities, power to heal and to enable us to ‘run’ our world. It explores how when we run, we can see our city anew, dodge CCTV cameras, play hide-and-seek with the Big Bosses online, as well as take a cue from the ‘runner’s high’ and think in an exuberant manner free from logic, hierarchy and convention.

→ ‘Inhabitants’ and ‘New Immigrants’ of Runswick: Murakami, Phedippides and Zizek (who disses running as a ‘New Age myth’) aside, other inhabitants of Runswick Bay include a wide range of running-related people, real and imaginary, past and present. They include: secret-runner-Turner-Prize-Winner Keith Tyson; Angry Young Man ‘Colin’ of  ‘The Loneliness of the Long Distance Runner’, the foot-lover-cum-Chinese-sage Lao Tzu; our 2-million-year-old runner-ancestors of the Homo erectus; fate-and-game-changer Lola of ‘Run Lola Run’, runner-politician Boris Johnson and code-breaker Alan Turing who invented the computer mid-run. Some of these characters play themselves, while others are played by local actors, or drawn by local school children. King Kai interviews and conducts discourses with these characters about running while running through the beautiful landscape of Runswick. It is just as well that the Latin etymology of the word ‘discourse’ refers to ‘running from place to place’. With local runners and artists, King Kai generates GPS drawings, animation, and music inspired by running. Along the way, she dispenses running tips, gets her head MRI-scanned before and after a workout, summons the Taoist gods to learn about the human body’s role as a centre of knowledge and a map of the cosmos, as well as hang out with techies to develop running apps, and offers herself as guinea pig to test-drive them.

[/ppmtoggle] [ppmtoggle title=”RUNNING CAN GIVE WALKING A RUN FOR ITS MONEY.”]The cultural tradition of walking has long dominated the art world. We are familiar with the works of the Situationists, Richard Long, Janet Cardiff and Francis Alys, just to name a few. Since at least the 1970’s, the world has experienced what Sir Roger Bannister terms a ‘running boom’ (cited in Newsholme & Leech 1983, p.vi). In the past decade, neuroscientists, urbanists philosophers and novelists are already harnessing running in their research (Murakami 2008; Mattson 2012; Latham 2013; Austin 2007). Yet, the art world is slow to capitalise on running as subject matter and/or a creative approach. There are gaps in the ‘TV world’ too. 5 million viewers watch the ‘live’ broadcast of the London Marathon on BBC, and many more catch up with it later when it is beamed across 150 countries (The London Marathon Limited 2013; London Town 2013). Yet, we have not seen any TV show that properly investigates the arts, history and science of running. Of late, we have welcomed Brian Cox, Mary Beard and Grayson Perry into our living rooms. Could there be room today for an artist-academic activating non-Western sources to share research on the piping-hot topic of running in with an informative yet entertaining approach?  ‘Let Your Imagination Run Riot in Runswick!’, which synthesises rigorous research with dynamic art practice, can be the first steps to fill in the lacunae.[/ppmtoggle]