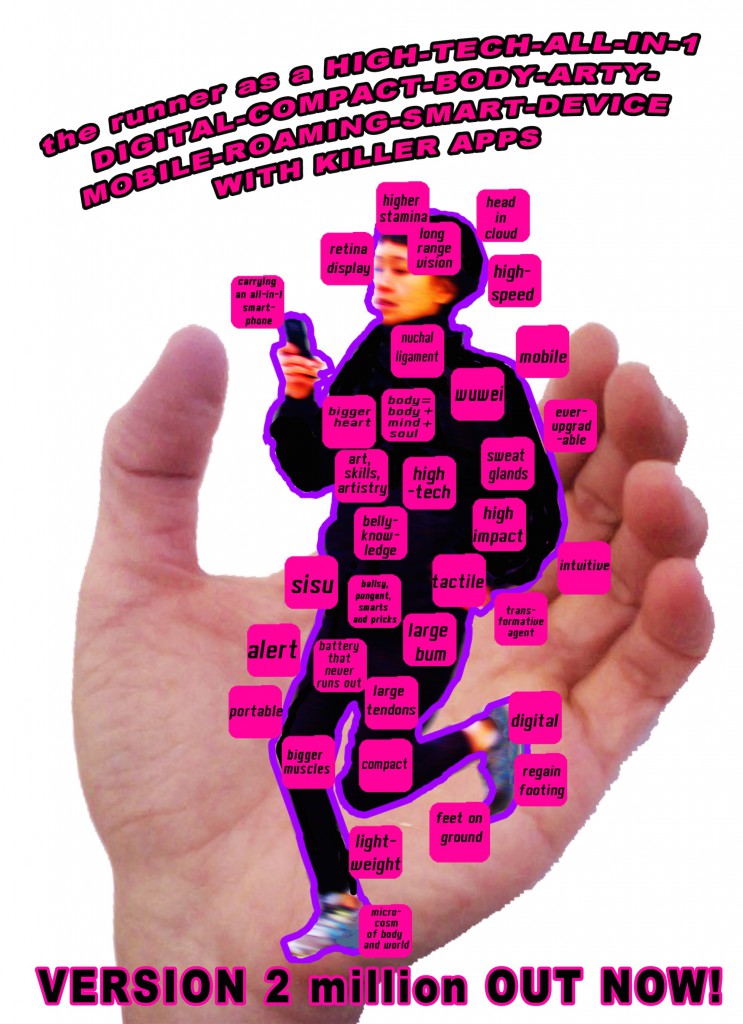 Just how has the human body and mind been designed that makes us tailor-made for running for the last 2 million years, and for the next 2 million years to come? Tired of your endless quest for the perfect app and the next betterfastersmarter smartphone? Grab this 3D printed educational kit and assemble your very own High-Tech-All-In-1-Digital-Compact-Body-Arty-Mobile-Roaming-Smart-Device-With-Killer-Apps-Version-2-Million. Through this smashing model kit of a human runner re-imagined as a smartphone, learn, hands-on and first-hand, about the human animal’s unique ‘apps’ ‘tailor-made for running’ that make us ‘premier endurance predators’ that way out-smarts all other animal runners and technological gadgets that we will ever invent. Kai first conceptualised this idea in 2010.

[ppmtoggle title=”Regaining our footing in the digital world”]The High-Tech-All-In-1-Digital-Compact-Body-Arty-Mobile-Roaming-Smart-Device-With-Killer-Apps-Version-2-Million seeks to synthesise the cleverness of the internet with that of the runner’s body. The conceptualisation maps-together the digital not just of the computer but our fingers and toes, the new (technology) and the old (Daoism/Taoism), art (‘body-art’) and machine (technological gadgets), the concrete (physical running) and the rhetorical (running as a metaphor). Given a world in which we can go online and move about outdoors simultaneously, an approach that emphasises the power and poetry of our body may be a first step towards helping us to re-gain our literal and metaphorical footing. It is a provocation, an invitation for us to  metaphorically ‘re-wire’ or ‘re-program’ ourselves to get in touch with the intelligences of the human body, again. The long-winded re-imagination may also function as a cheeky shield against our technological-hallucination. Instead of being a lab-rat programmed to obey our digital masters, become a High-Tech-All-In-1-Digital-Compact-Body-Arty-Mobile-Roaming-Smart-Device-With-Killer-Apps, Version 2 Million make us as smart as, or even out-smart them – and be smarting, too.[/ppmtoggle] [ppmtoggle title=”High-tech, apps”]

The labels of ‘high-tech’ and ‘killer-apps’ are detournement and reclamation of words which are ubiquitous in the technologically-mediated world today. The tag ‘high-tech’ points to how ‘technology’ refers not only to the feats of computer engineering, but the ‘application of knowledge to the practical aims of human life or to changing and manipulating the human environment’ (Merriam-Webster Dictionary 2012e). Additionally, the 17th century definition of technology points to ‘a discourse or treatise on an art or arts’ (Simpson & Weiner 1989, vol.XVII p.705), while its etymology, ‘technē’, refers to ‘art and skill’ (Merriam-Webster Dictionary 2012e). As an application of the body’s knowledge, art and skill, this approach aims to encompass a clever and stinging discourse that may allow us to change and manipulate our digital environment. After all, technology can and does offer new opportunities to re-embrace the intelligence of our body. There is the option to be less sedentary now that the internet is mobile and not bound to the desktop; technological interfaces are increasingly tactile (as seen in ‘wii’ consoles and touchscreen faculties of smartphones); digital gadgets (such as GPS devices and gopro mini video cameras) have enhanced our outdoor activities.[/ppmtoggle] [ppmtoggle title=”Smart”]

The High-Tech-All-In-1-Digital-Compact-Body-Arty-Mobile-Roaming-Smart-Device-With-Killer-Apps-Version-2-Million is about being ‘smart’ not just in terms of being clever, but in terms of causing a ‘sharp stinging’ (Merriam-Webster Dictionary 2012d), too. In addition, rather than denying or rejecting the human body, this conceptualisation is ‘smart’ because it celebrates and harnesses its intelligences.[/ppmtoggle][ppmtoggle title=”All-In-One body”]

This conception of the human body as a smart, all-in-one device comes from the ancient Chinese tradition of Daoism (Taoism). The Daoist body is not separate from the mind and soul (Kohn 1993, p.160). Instead, it is also a three-in-one hub that thinks and feels. In other words, rather than an un-thinking lump of flesh and muscles, this body is intelligent, and has many intelligences. In On Chinese Body Thinking: A Cultural Hermeneutic, philosopher Kuang-Ming Wu describes intuition ‘a kind of intelligence’ (1997) that the body has. He gives the example of how the body has a powerful feedback system. ‘When hungry the body gets food and eats’; ‘when amused it laughs’, he writes.

You may laugh at the rudimentary set-up. And it may well be – which may also be why we ignore it. How many of us listen (or speak, for that matter) to our body? When did we stop trusting our gut instinct when we feel under the weather, and instead ‘Google’ and ‘Ask Jeeves’ about our symptoms to ascertain if we are indeed unwell? When did we cease looking and experiencing, but only feel that something has happened not just unless or until we have tweeted about it or instagrammed it, but only after we earn at least one hundred ‘likes’ from our peers?

Indeed, when Daoism scholar Kristofer Schipper’s describes wuwei as ‘a spiritual technology by means of which humans cultivate their own nature and the nature around them’. (2003, p.140), he is also reminding us about the richness of the word ‘technology’. Wuwei is an art and skill, since it is about an attainment of a naturalness from rigorous training (in practices such as the exercise of taiji or taichi). The juxtaposition wuwei as a ‘technology’ of intuition in relation to internet ‘technology’ can enable us to re-assess our own nature and our relationship with the internet-layered environment that we inhabit.[/ppmtoggle][ppmtoggle title=”Digital, compact”]

The High-Tech-All-In-1-Digital-Compact-Body-Arty-Mobile-Roaming-Smart-Device-With-Killer-Apps-Version-2-Million is also inspired by running.

After all, the runner’s body already gives our smart gadgets a playful run for its money, as it poetically matches several features of our world today. Runners are ‘digital’, as we mobilise the digits of our toes, and mobile.

Like small gadgets, runners tend to be compact, too. Runner-author George Sheehan describes the distance runner as ‘slim with good legs and a small trunk’ (1978, p.241). He even supplies a formula:

‘Double my height in inches and you have my weight. My bones are small, my legs short muscles stringy, with little body fat’. (1975, p.6)

In Alan Turing, we see a symbiotic relationship between running and technology. Although he was ‘the designer of the “electronic brain”’, as scientist Andrew Hodges describes him, Turing was such an consummate runner that he was nearly shortlisted for the British team at the 1948 Olympics (2012).

Running and technology run hand-in-hand in more ways. As if a parody of the breathless rate of technological progress, runners can advance with tremendous stamina, that is, speed and endurance (Dafter 2011). The runner’s body is supplemented with an indefatigable mind too. ‘Sisu’ or strength of will was made famous by Finnish runners who overcame long distances, poker-faced, in the 1950’s (Gotaas 2009, p.156). Runner-biologist Bernd Heinrich even argues that it was our mental stamina that motivated our ancestors to chase the swift antelopes in the first place, 2 million years ago:

‘It was not just sweat glands that made us premier endurance predators. It was also our minds fuelled by passion. […] We can visualise far ahead’. (2002, p.177).

With the tag of ‘body-art’, this approach also foregrounds the art and skill of the body. Teh-Ching Hsieh’s Outdoor Piece seems to exemplify the technē of the body. Some critics use the term ‘body art’ interchangeably with ‘performance art’ (Carr 1993). Hsieh’s work seems to justify this. It is his body – and not paint, bronze or film – that is his primary medium of expression. The artist walks around the Lower Manhattan, adhering to his rule ‘I shall stay OUTDOORS […] never go inside’, for an entire year. Although that winter was ‘one of the coldest of the century in New York’, Hsieh slept in his sleeping bag and bathed at the Hudson River (Menegoi 2007). No wonder a critic describes Outdoor Piece as a ‘test of his own endurance’ (Sontag 2009). Indeed, Hsieh’s body art resembles an extreme endurance sport. Needless to say, such a work demanded mental stamina, too. Hsieh himself calls Outdoor Piece his most ‘difficult’ work as it took ‘the most mental energy’ (cited in Bajo & Carey 2003). Outdoor Piece cannot be accomplished without the long range vision that characterises a distance runner. In fact, being slim and not much more than five foot three, the artist physically resembles one, too.

A brand of ‘body art’ can be said to exist in the running world, too. After all, the runner’s body is the medium with which they run and interact with the world. In fact, runner George Sheehan correlates the runner with the artist and poet (1978, pp. 126-246). With running,

‘I have found my specific pattern, heard the voice that calls me, found my art, any medium to experience and interpret life. (1978, p.126)

Running is the runner’s art, which is created ‘through imagination and reason and intuition’. Sheehan equates his daily running session to ‘being a poet an hour a day’. He even maps running specifically with performance. ‘We were not created to be spectators’. Rather than mere ‘theatregoers’, ‘onlookers or bystanders’, runners perform, in both the literal and figurative senses of the word:

Instead of ‘body art’, the term we will run with is ‘body-art’. The hyphen may  allude to the network of meridians that run throughout the Daoist body. Such a mark can act as a visual bridge between, and stresses the importance of ‘body’, ‘art’, and the art of the body. This is not a call for us to become artists as such (neither is it a claim that running in itself is an art form per se). Instead, it is hoped that the activation of body-art as a framework to think about running and the runner’s body may help to raise our consciousness about how our body can be mobilised as a creative medium to interface with, express and interpret the digital world. In other words, the  High-Tech-All-In-1-Digital-Compact-Body-Arty-Mobile-Roaming-Smart-Device-With-Killer-Apps, Version 2 Million  aims to be a playful way for us to re-instate the body and its art into our digital world, to run hand-in-hand with technology, or what the Daoist refer to as ‘clever machines’.[/ppmtoggle][ppmtoggle title=”Cerebral, cognitive, emotional”]

Connecting these disparate notions together with a hyphen, and re-imagine yourself as a High-Tech-All-In-1-Digital-Compact-Body-Arty-Mobile-Roaming-Smart-Device-With-Killer-Apps-Version-2-Million which maps-together the digital of the computer and toes, the new (technology) and the old (Daoism), art (‘body-art’) and machine (technological devices), the concrete (physical running) and the rhetorical (running as a metaphor). Given a world in which we can go online and move about outdoors simultaneously, an approach that emphasises the power and poetry of our body may be a first step towards helping us to re-gain our literal and metaphorical footing. As Sherry Turkle says,

‘We have to see ourselves as in a position to profoundly affect the outcome of how things are going to go. […] We live in our bodies. We are terrestrial. We are physical as well as mental beings, we are cerebral, cognitive and we are emotional’. (Technology Review 1996) 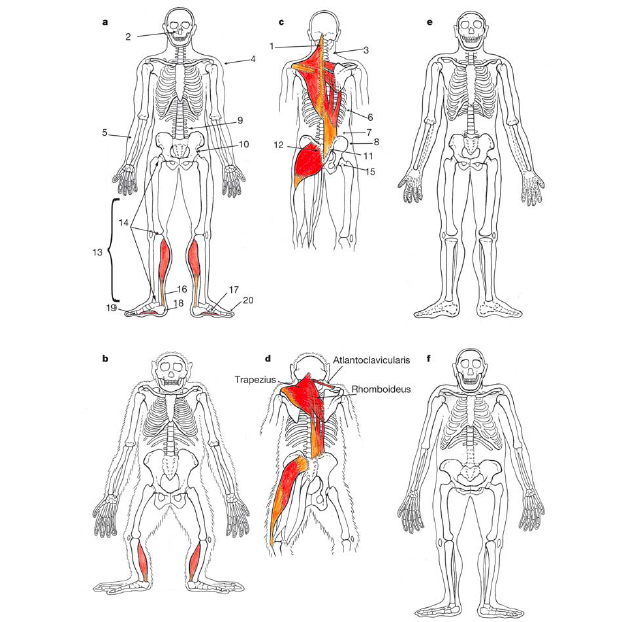