Click above to view video recording of the third run of the performance-lecture Running (In) Your City, conducted at the ESRC-funded Running Dialogues’ session entitled ‘Running, Space and Place’, which took place at Roxy Bar & Screen in London on 29 June 2015. Click image below to view the Prezi, and click here to read an edition of the spoken-word script, or download the PDF here.

This work attempts to explore running as a critical and creative urban technology. Additionally, it carries footnotes exploring the enactment of running in the thinking process (thinking in a ‘running’ way, by way of collaging different schools of thought together), and the enactment of running in the presentation process (and the difficulty, dizziness and delirium of running such a discourse, and a self-reflexive critical reflection of the politics and problematics of presentation, plus a side response to geographers’ ‘performance turn’, and twists, and turns, and topsies, and turvies).

If you get giddy from running through the 200 or so slides, you are (probably) experiencing the runner’s high vicariously. 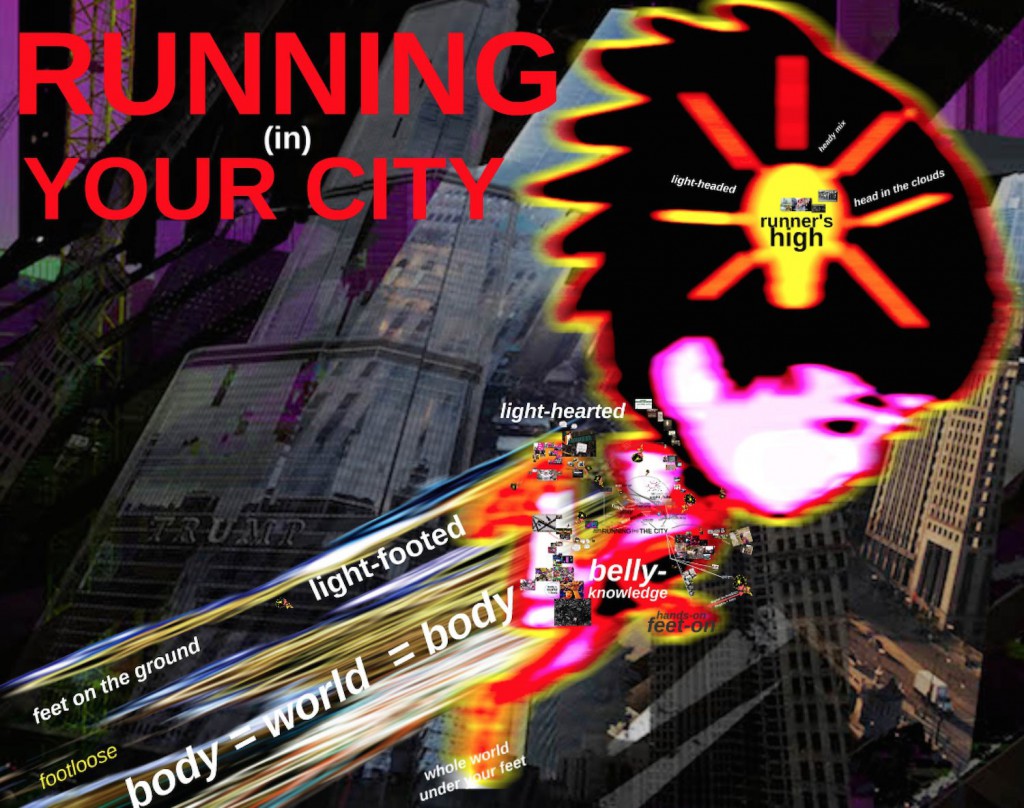 This performance-lecture premiered at the prestigious Association of American Geographers’ (AAG) Annual Meeting in 25 April 2015. This is in some ways the Geography world’s equivalent of the Venice Biennale (albeit sans members of the public), with Geography’s who’s who sharing new findings. This year, 9000 (!) geographers from all over the world congregated in Chicago. Kai’s work was part of a session (see details and gallery below) convened by Dr Alan Latham and Dr Russell Hitchings (both Senior Lecturers at UCL Geography), entitled ‘Exercise and Environment: New Geographies of the Exercise Experience’.  Alan is also the Co-Director of the RUN! RUN! RUN! International Body for Research. A previous session of ‘Exercise and Environment’ took place at the RGS-IBS International Annual Conference.

An earlier version of this was shared at the South East Asian Arts Festival in London, Fall 2014. The arguments about the city are based on findings recorded on pages 78-96 in Kai’s Fine Art PhD thesis which has, since being uploaded in July 2014, been downloaded 660 times (as of April 2015).  [/ppmtoggle] [ppmtoggle title=”CATCH RE-RUNS IN MALMO + LONDON“]Variations of this were also seen in:

→ 2015 MAY 7: ‘RUN! RUN! RUN! MALMO’. Running Symposium. Swedish University of Agricultural Sciences, Malmo, Sweden. What has the great film auteur Ingmar Bergman got to do with a Prezi about running? Click said Prezi to find out. Department of Urban Studies and Landscape Architecture. Convened by Professor Mattias Qviström. Dr Alan Latham, who is working on a 4,400,000 Swedish krona-research project funded by Formas, Swedish Research Council entitled Reinterpreting Fitness Running with Professor Qviström, also spoke. So did Professor Hayden Lorimer, keynote speaker at the inaugural RUN! RUN! RUN! International Festival of Running. Download programme here and see images of the wonderful 2-day event below.

In this work, Kai runs through the ways in which running in the city may differ from running in a non-urban site, and how running may enable us to engage with the city in a manner that may differ from other urban exercise practices. What do we see, hear, smell or feel when we weave through the crowds and buildings in the streets, as opposed to, say, flocks of sheep rolling about in the rolling hills? What are the ways in which moving in a speed faster than walking differ from cycling, parkour or, well, walking? Kai also takes a step further to ask if we can think of running as more than an exercise. Can we activate running as a playful toolkit to help us re-imagine the city? Can running make us feel a sense of ownership of the city? As we run in the city, can we also ‘run’ it – metaphorically-speaking?

Kai samples practices and theories from different schools of thought, including Situationism and the Chinese philosophy of Daoism (Taoism). She also shares what she has learnt first-hand and first-feet as a runner in London and Singapore.

Drawing on the traditions of the performance-lecture (Walid Raad/Atlas Group) and cine-essay (Chris Marker, Agnes Varda), Kai’s brand of performance-lectures are critical modes of inquiry in which a highly-collaged set of moving images — in this case a Prezi — run hand-in-hand with a scripted spoken text which is densely-littered with running-related metaphors. Sound and image dance and battle with each another, enacting the exuberance of running, yet also raising questions about academic and artistic conventions of knowledge production.[/ppmtoggle][/ppmaccordion]