Warning: "continue" targeting switch is equivalent to "break". Did you mean to use "continue 2"? in /customers/f/6/1/kaisyngtan.com/httpd.www/r3fest/wp-content/plugins/siteorigin-panels/inc/styles-admin.php on line 392 LEEDS LEG REVIEW – RUN RUN RUN Biennale
↓ Skip to Main Content

By Dr David Hindley. Dr David Hindley is a Senior Lecturer in Sports Education at Nottingham Trent University. He was invited by the RUN! RUN! RUN! Biennale 2016 to review the Leeds Leg, which was a seminar that took place at Leeds College of Art on 21 November 2016. The original article appeared on his blog, Running the Line , on 23 November 2016,

Stripped to its barest essentials the act of running is remarkable for its stunning simplicity. The movement of putting one foot in front of the other. And yet such definition betrays its nuanced complexity, multiplicity of meanings and inbuilt contradictions. As John Bale opines, an “understanding of running cannot be achieved by simply looking at runners”. Of equal consideration is the socio-cultural context in which running occurs. Thus how might one critically interpret running as a political act of defiance in the hands (or rather feet) of women and girls in a conflict-affected region of Afghanistan, alongside privileged (predominantly male) Western fitness tourists testing their resilience, endurance and strength against the exotic extremities of the Saharan landscape in the Marathon des Sables? What can be learned or revealed from mobilising running to comprehend the experiences of refugees fleeing persecution and torture when juxtaposed with aesthetic displays of suffering in endurance sports through documentation in contemporary art? 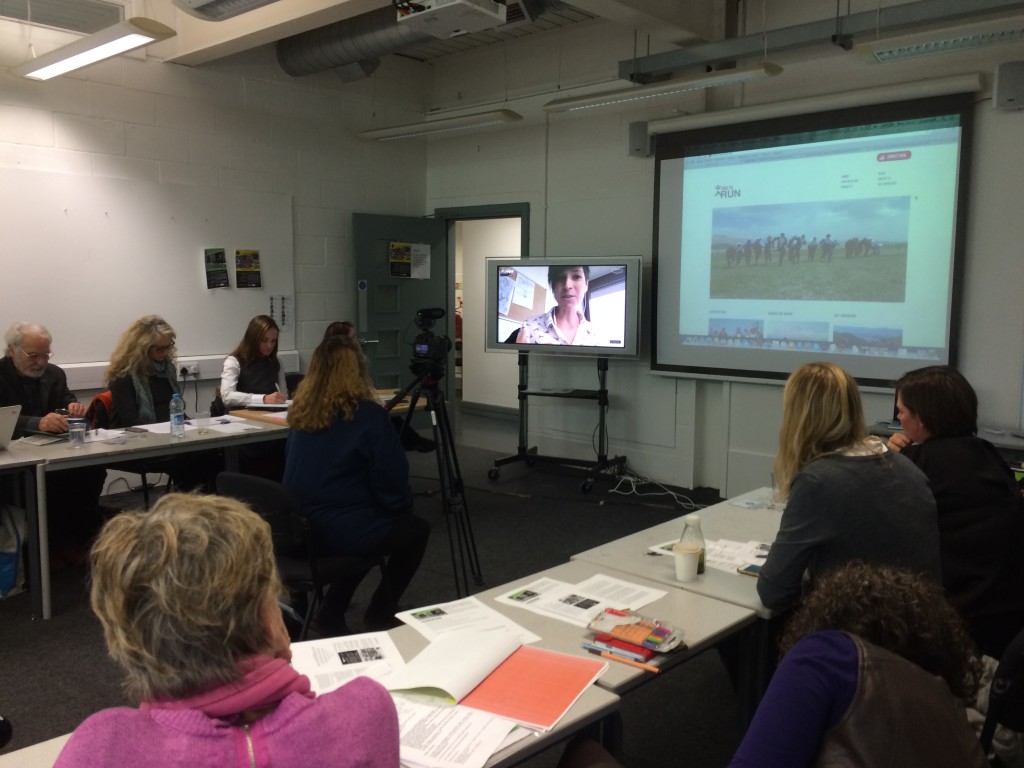 This is the intentionally jarring backdrop to the opening leg of the triptych Run! Run! Run! Biennale 2016, which as curator Kai Syng Tan alludes is the darker ‘difficult second album’ following in the footsteps of the inaugural Run! Run! Run! International Festival of Running held in 2014. As with its predecessor, the purpose is to provoke conversations across different disciplines, in the process stimulating new research directions and creative collaborations to add to our existing understanding of, and fascination with, running. In particular, there is a noticeable bent towards exploring the relationship between the distinct spheres of art and sport, which admittedly to the lay outsider may not appear to be immediate bedfellows. And yet at various points during the afternoon I am reminded of the illustrator Leanne Shapton, who in her quietly profound memoir, Swimming Studies, observes “artistic discipline and athletic discipline are kissing cousins, they require the same thing, an unspecial practice: tedious and pitch-black invisible, private as guts, but always sacred”.

At this juncture it is worth emphasising that this ‘review’ of the Leeds leg is in no way designed to present an exhaustive running commentary of the events proceedings. For starters, my frenetic note-taking is unlikely to adequately capture, nor do justice to the energy and richness of the contributions. Instead, I shall endeavour to construct a personal narrative – a fleeting sketch if you prefer – to consider how chance juxtapositions spark new unities and converging paths, as well as reflecting upon some of the inherent disconnections.

A discernible starting point is the notion of (pushing) borders and boundaries, whether creative, geographical, or challenging the limits of the human body. These intersections are explored most notably in Karen Throsby’s paper which memorably conjures marathon swimming’s intense, isolating pleasures. Drawing on her (auto)ethnographic study, Karen uses the sport of swimming long distances as a conduit for thinking about mind-body boundaries (reflected in the ‘mind over matter’ rhetoric championed by the marathon swimming community) as well as the freedoms and privileges the sport demands, alluding to the resource-greedy nature of the leisure pursuit, as well the mobility and financial capital necessary to compete. There are notable linkages with Debbie Lisle’s less charitable depiction of the ‘bro-dog’ ultramarathon runner, seemingly motivated by a desire to conquer the forbidding Sahara Desert and a post-race career as a motivational speaker to multinational corporations. Our attention is drawn to the troubling reductive colonial encounters, with a handful of Moroccan endurance runners continuing to defeat year-after-year the most over-invested, hyper-equipped and highly trained ultramarathon runners. 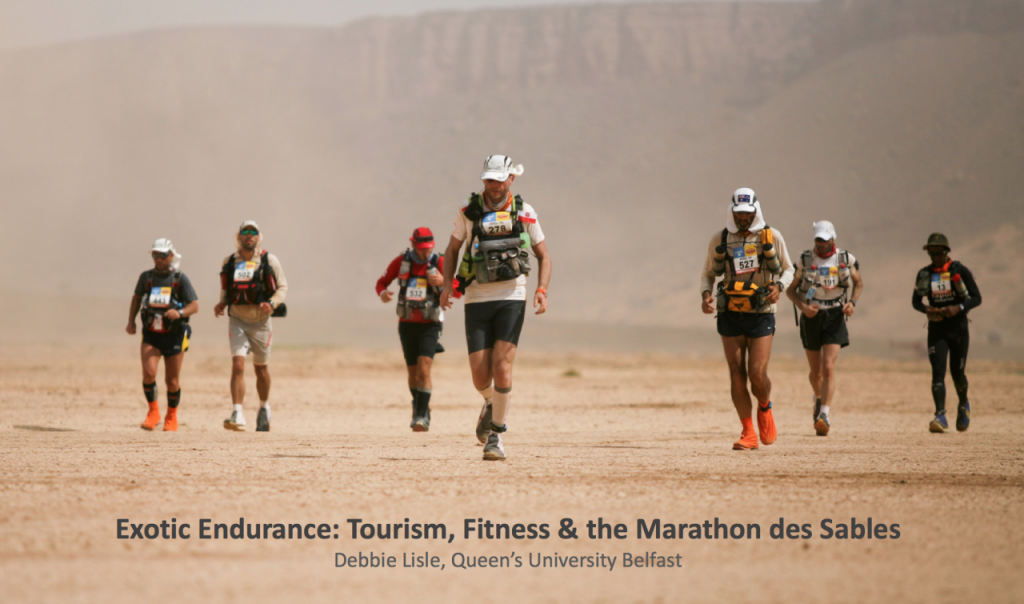 This leads us to consider a complimentary theme, that of overcoming and/or suffering. The latter are at the forefront for any athlete, whether it means beating an opponent (or oneself and creeping self-doubts), achieving a faster race time, or coping with pain and injury. Writ large in Stephanie Case’s inspirational opening are the meanings and by-products derived from the defiant, public act of running. Her narrative is one of empowerment and transformation, using running, fitness and outdoor adventure programmes as an avenue to freedom, to foster social networks of support, and to help shift the perception of gender roles in war-torn societies where women and girls are disproportionately affected by conflict. We learn that Stephanie (aside from being a supremely talented ultramarathon runner) is the founder and volunteer President of Free to Run, a charity which champions the idea that running is significantly more than a physical act. Kai Syng Tan picks up this baton, teasing out the irony between the gruelling journeys that migrants undertake to seek asylum, and the pursuit made by ‘escapees’ of Europe seeking gruelling (and exorbitant) endurance challenges in the name of fitness, adventure and/or self-fulfilment.

For Lisa Stansbie, the fusing of sport with art enables us to investigate the narratives, processes, rituals and apparatus of endurance sports. She highlights the work of Dutch artist and triathlete Guido Van Der Werve to explore the synergies between the two disciplines (for example, physical effort, solitude, repetition, and boredom). Doug Sandle – founding Chair of Fields of Vision – adopts a similar perspective, providing an impassioned defence for marrying the potentially unlikely pairing of the artist and the athlete. He presents a number of anecdotes (from Brian Jungen’s sculptures crafted from Nike trainers, to Martin Creed’s Work No 850 for Tate Britain where volunteer runners were asked to make the 86 metre dash along the length of neo-classical sculpture gallery) to help illustrate the potential the arts have to celebrate, encapsulate and express sports practice and culture. 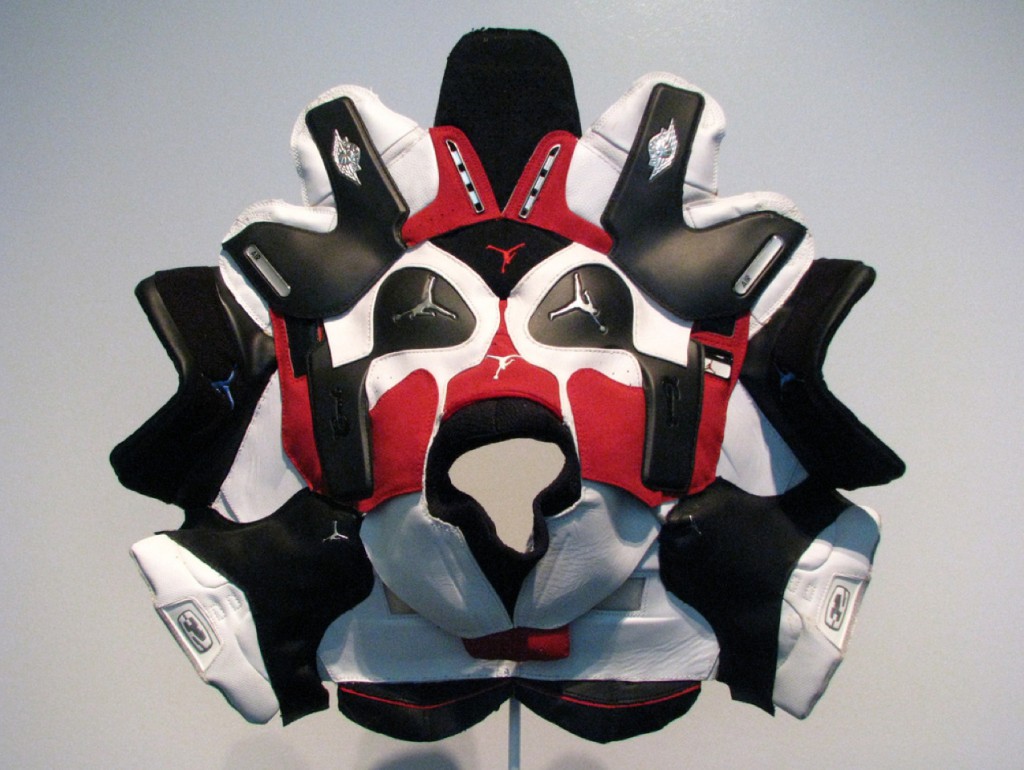 A slide from Doug Sandle’s slideshow.

As the opening leg of the Run! Run! Run! Bienalle draws to a natural conclusion, from the resultant interdisciplinary conversations (and attempts to shrug off our academic silos) one cannot help but wonder, where do we go from here? As alluded to earlier, amidst the potential to identify aspects of common ground, the assorted line-up (or in Kai’s words ‘mix-and-mismatch programming’) invariably leads to incongruities and divergent paths. By drawing upon and navigating such diverse perspectives, the resultant challenge and blurring of these distinctions will hopefully provide further insights into the ways people understand the pursuit of running in their own lives. As Perrier and Bridel note “truly interdisciplinary work cannot give primacy to one discipline over another but rather strive to acknowledge and chip away at disciplinary silos that seem to have a kind of endurance of their own”.

*With thanks to Kai for the invitation and for supplying the images. 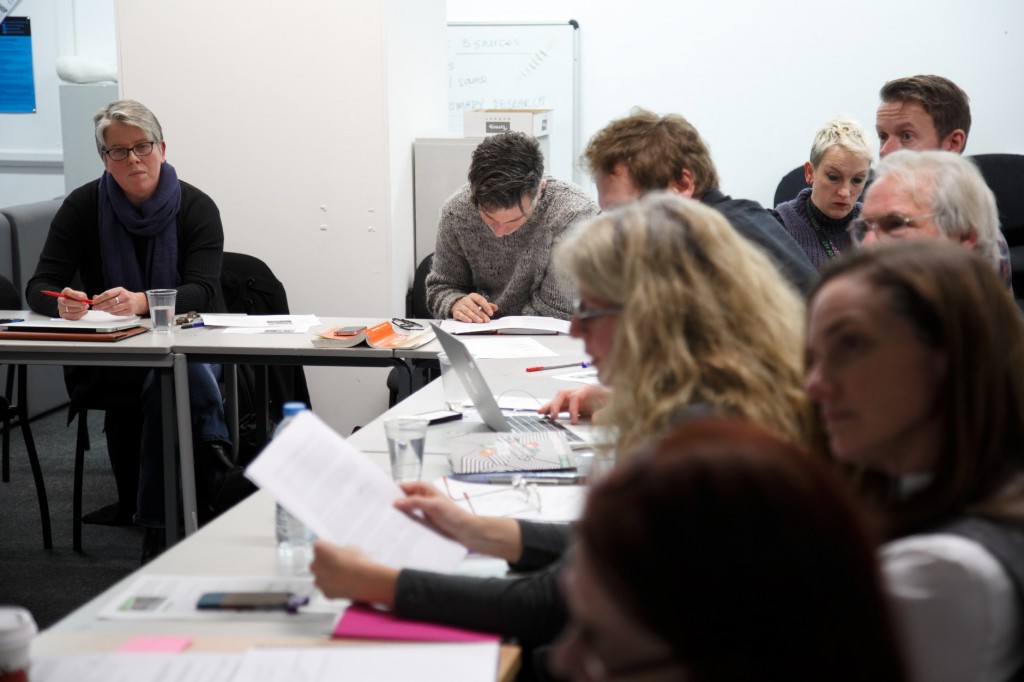